Pocahontas is located in deMun Township.  So, who was deMun (yes, he was a man, not a demon)?  He was a man of national and international importance who lived here in Randolph
County, yet many local residents are unfamiliar with him.

Lewis deMun was a French aristocrat (a Chevalier of France),  Born on his family’s sugar plantation in the French colony of Haiti, deMun was sent by his family to France for his education. While there, he became an aide to the FrenchQueen, Marie Antoinette.  Fleeing the French Revolution, he ended up in Washington D.C.  There he became the right hand man of Benjamin Latrobe–the architect of the U.S Capitol Building.  deMun oversaw the building of the first part of the Capitol–the west wing which houses the House of Representatives.  Later, he built the Baltimore Cathedral in that city.

While in the nation’s capital, deMun became a friend of Thomas Jefferson’s Vice President, Aaron Burr.  When Burr left office, he engaged in some questionable behavior in the newly acquired Louisiana Purchase territory.  History isn’t quite sure what Burr was up to.  Many think he was trying to create a new nation (with him as its leader) out of the territory and perhaps the Spanish territory that became Texas later.  Burr was tried for treason by the U.S., but he was acquitted.  deMun was apparently heavily involved in whatever Burr was up to.

Fearing prosecution for his involvement with Burr, deMun fled to the wilderness–to family land in what became Randolph County, Arkansas.  There were five large plantations owned by Frenchmen along the black River.  The deMun family owned hundreds of acres in what became south central Randolph County–the area where the Spring and Black rivers converge.

In 1813, deMun founded deMun Mills on the Mill Creek along the southern edge of what’s today the City of Pocahontas.  The Mills included a grist mill for grinding grain into flour–the first grist mill in what became Arkansas–and a saw mill.  The remains of deMun’s grist mill dam have been discovered in recent years, still in place after 202 years.

In 1815, Governor of Missouri Territory, William Clark, who made the expedition with Meriweather Lewis exploring U.S. Territory to the Pacific, appointed his friend, Lewis deMun, to head the commission to chose a county seat for the newly formed Lawrence County, Missouri Territory.  The new county consisted of what became 31 counties in Arkansas and 14 in Missouri. It extended east to west from the St. Francis River to west of what today is Razorback Stadium in Fayetteville.

deMun was appointed chief administrator of the new county as well.  He was also head of the militia in this huge territory. For the county seat, deMun chose his property along the Black River eight miles south of what became Pocahontas. He sold 220 acres of his property to Missouri Territory where the Town of Lawrence (renamed Davidsonville the next year) was created as the first planned town in what became Arkansas–a plated town of broad avenues, a public square, and where the first courthouse, U.S. Post Office, and Federal Land Office in Arkansas were established.
A few years later, Lewis deMun relocated permanently to Ste. Genevieve, Mo., where he and his brothers where leading citizens of that town and the nearby city of St. Louis.

This grassy location was once the scene of a deadly explosion, and a ghost haunts the spot to this day.

Gather in front of the old Imperial Theater, 302 N Marr Street, on October 3rd for the 9 p.m. departure of this easy walking tour (the tour lasts about 90 minutes). Cost is $5/person to benefit Five Rivers Historic Preservation. 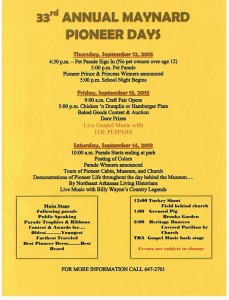