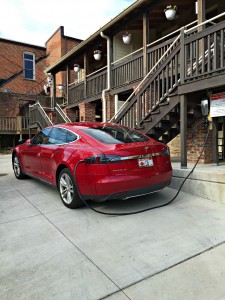 Electric cars in general, and Tesla Motors in particular, have been in the news a lot lately. Many analysts are saying there will be huge numbers of these high-efficiency* vehicles on the roads within the next few years, with Tesla soon to release a long-range electric car priced at under $35,000 (and costing even less when the $7,500 federal tax credit for electric cars is added in). With this in mind, Lesmeister Guesthouse of Pocahontas has just installed electric vehicle chargers for use by Lesmeister guests.

For drivers of electric and hybrid vehicles, these new chargers make it easy to visit Randolph County while enjoying a free car charge. Before the chargers were installed, Tesla drivers could only get from Little Rock to St. Louis by driving far out of their way to utilize chargers in western Missouri or western Arkansas as they made a multi-day trip between the two cities. But travelers can now take the direct route, driving from Little Rock to Pocahontas, charging their car while they enjoy a night’s rest at Lesmeister Guesthouse, then driving on to St. Louis the next morning. A fully charged Tesla can easily reach St. Louis from Pocahontas. 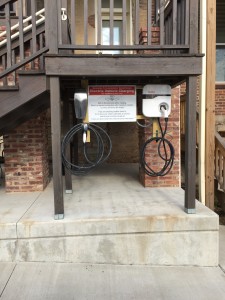 In addition to a Tesla high power wall charger, which delivers 80 amps of power to charge a Tesla automobile in less than 4 hours, The Lesmeister also installed a 30 amp “generic” charger that works on non-Tesla brand electric and hybrid vehicles such as the Chevy Volt, Ford Focus, Nissan LEAF, and Toyota Prius.

The construction project rehabilitating the 1902 Lesmeister Building on Marr Street in Pocahontas to create “Lesmeister Guesthouse” was among several Arkansas projects recently honored in Little Rock.

The Lesmeister’s first place award for “Excellence in Preservation Through Rehabilitation” was presented by the Historic Preservation Alliance of Arkansas. Dr. Patrick Carroll, owner of The Lesmeister, along with Ralph Pink Baltz, of T-Co Contractors, Inc., general contractor on the project, were in Little Rock for the award presentation. Also in attendance were Charlotte Baltz, and Ronnie and Sonya Walker of Black River Technical College.

The Arkansas Preservation Awards are given each year to recognize the important work being done throughout Arkansas to preserve and protect places of historical or cultural importance. “In every one of these projects, someone made the decision that preserving the physical place is important. I am proud of everyone who helped make these projects possible by contributing time and resources. We should all be proud to be part of a movement that is adding such value to communities around the state,” said Vanessa McKuin, Executive Director of the Historic Preservation Alliance of Arkansas.

Among others in attendance at the award presentation banquet were Governor Mike Beebe, Senator Mark Pryor, and former Senator David Pryor, as well as preservation specialists from all over Arkansas. The event, held at the Clinton Presidential Center, also included an award presented to Joanne Cash Yates, sister of music superstar Johnny Cash, for the restoration of the Cash family home in Dyess, Arkansas. Journalist Rex Nelson served as Master of Ceremonies for the event.

Shady River Nature Resort on the beautiful Eleven Point River in Randolph County has a new feature.  In addition to its uniquely appointed cottages on a bluff overlooking the river, it now offers tree house accommodations.  “Firefly”, a two level tree house is now available for occupancy.
Located in a natural area of giant white oaks, the cool accommodation overlooks a huge meadow where deer graze each evening and morning and birds and other wildlife are abundant.  With wide porches both above and below, the fully furnished tree house is decorated in an African theme inside.  Traveling the wonderful nature trails at Shady River either by electric cart or by hiking, visitors can easily imagine they’re on safari at an exotic location.  Otherwise, one can enjoy swimming, kayaking, canoeing, or fishing in the pristine, cool waters of the spring fed Eleven Point River, last refuge of the endangered Ozark Hellbender.