The Heritage Trails System Act, passed by the 87th Arkansas General Assembly, aims to promote and recognize key routes through our state that shaped our past. Of the four Heritage Trails created, three run through Randolph County, recognizing the importance of our area in early Arkansas history.

The Heritage Trails that run through Randolph County include the following:

An ancient trail that originally ran from Vincennes, Indiana to Natchitoches, Louisiana, known locally as the Old Military Road, later split off from its original Route in the 1820s and became better known then as the Southwest Trail—the route settlers from the U.S. took on the way to the newly opened territory of Tejas (Texas). The first federally sponsored road in the state which four—fifths of Arkansas’s population used to enter Arkansas, came into the state at Hix (later Pitman’s) Ferry (1802) in extreme northeast Randolph County on the Current River and proceeded diagonally across the county before exiting into Lawrence County at Miller’s Ford just south of Imboden on the Spring River. See 5rhp.org for a map of the original route.

The current driving trail created by the legislature begins at the Arkansas/Missouri state line on Hwy 115, proceeds through Maynard to Pocahontas, takes Hwy 63 to Imboden, then returns to Hwy from Imboden to Smithville. The trail then goes on to Little Rock and ends at Texarkana.

The Trail of Tears

The Benge Route of the Trail of Tears reflects the tragic relocation of Cherokee and Creek tribes from the southern Appalachians in 1838. The original trail covered the same route as the Southwest Trail in Randolph County—entering Arkansas from Missouri at Hix (then Pitman’s) Ferry and exiting the county at Miller’s Ford. This Heritage Trail also takes that same proceeds to Smithville in Lawrence County, then goes west across the Ozark Mountains to the Arkansas/Oklahoma state line west of Fayetteville. Several other branches of The Trail of Tears Heritage Trail take different routes through the state.

The primary Civil War Heritage Trail takes a similar route as the above two through the county—Hwy 115 to Hwy 63 from the Arkansas/Missouri state line, then Hwy 166 to Davidsonville Historic State Park, then on to Black Rock in Lawrence County. Featured stops on the trail in the county include Maynard Pioneer Park and Museum; Overlook Park and the Civil War River Walk Memorial Trail in Overlook Park, Pocahontas; and Davidsonville Historic State Park. This Civil War Trail ends at Camden in south central Arkansas. Three other Civil War Heritage Trails were also created, though the one through Randolph County is by far the most prominent.

The fourth Heritage Trail is the Butterfield Stage Trail that runs through northwest Arkansas. It’s expected that these three trails in Randolph County will soon be marked with highway markers and should bring large numbers of heritage tourists to the county in the future. See arkansasheritagetrails.com for more information on these trails. Creation of these trails has been a joint effort of the Department of Arkansas Heritage, the Department of Parks and Tourism, and the Arkansas Highway and Transportation Department. 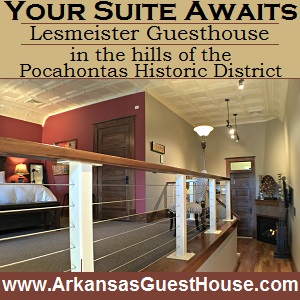